Berrien County's excellent location in the heart of "Michigan's Great Southwest" makes it a prime market for business, industry, and tourism. Its substantial and wide variety of agriculture has established locally grown crops as major attractions for tourists and food processors. 585 square miles of scenic natural beauty with 42 miles of shoreline on Lake Michigan make Berrien County a choice destination for tourists, artists, and naturalists.

Fort St. Joseph was established by the French in 1691 just south of the present site of the city of Niles. The fort was surrendered to the British about 1761, captured by Chief Pontiac in 1763, taken by the Spaniards in 1781, and by the United States after the Revolutionary War. Thus it became known as “the Land of Four Flags,” which is the theme of the new Berrien County Flag adopted in July, 1967.

Parc Aux Vaches, now the site of Bertrand, was an important crossing point of the Great Sauk Trial - a trail and waterway route extending from Montreal to New Orleans, a busy portage from the St. Joseph River to the Kankakee River which ran just south of Parc Aux Vaches. Many early missions were established in the Niles vicinity from 1688 to 1800. Berrien County was separated from Lenawee County in 1829 by the Legislative Council of the Territory of Michigan. The county seat was originally in the town of Newberryport, presently the site of St. Joseph City. The County was named in honor of John M. Berrien of Georgia, an Attorney General in President Andrew Jackson’s cabinet. 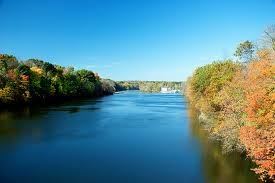 Berrien County’s population has grown from 4,863 in 1837 to 162,453 in 2000, twelfth largest in the State of Michigan. Its 42 miles of Lake Michigan shoreline, 86 inland lakes, and the St. Joseph, Galien and Paw Paw Rivers have attracted a substantial tourist trade. Port facilities and strategic location on arterial highways fostered industrial development. Lake-tempered water and rich soil aided the growth of fruit farming and the area has become one of the national leaders in fruit production.

Berrien County is a beautiful place to live, work, and visit. Come check us out!