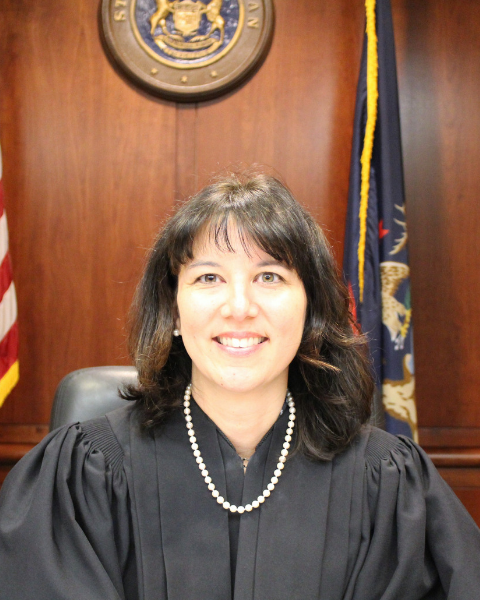 Donna Bacolor Howard was elected as a district judge to the Berrien County Trial Court on November 4, 2014, and commenced her term on January 1, 2015. She has been assigned to both the Criminal and Civil Divisions. On July 26, 2018, Governor Rick Snyder appointed Judge Howard to serve as the new judge of the 2nd Circuit Court in Berrien County. She is currently assigned to the Civil Division and oversees the problem-solving (Mental Health and Drug Treatment) courts. She also presides over the Business Court.

Judge Howard received a Bachelor of Arts in Economics from the University of Michigan, and her Juris Doctor from Wayne State University Law School. She grew up in Benton Township, attended elementary school in Benton Harbor, and is a graduate of Lake Michigan Catholic H.S., St. Joseph.

Prior to her election to the bench, Judge Howard was a practicing attorney for 17 years. She served as Berrien County Corporate Counsel from 2010 to 2014, and worked for private law firms doing primarily civil litigation, insurance defense, property subrogation and municipal law from 1997 to 2009, first in Southeastern Michigan, and then back here locally upon her return to Berrien County in 2005.

Judge Howard is a member of the State Bar of Michigan, including serving 2 terms on the SBM Representative Assembly for the 2nd Circuit, the Berrien County Bar Association, the Michigan District Judges Association, and the Michigan Association of Treatment Court Professionals. In 2016, Judge Howard also began serving on the Michigan Judicial Institute’s Academic Advisory Committee.

Judge Howard has served a number of community service organizations, including Rotary Club of SJ-BH and United Way, and is a volunteer to the area schools and other youth programs. She is a member of the St. John-St. Bernard Catholic Church, Benton Harbor. She and her husband, Rich, reside in Royalton Township, with their three children, who keep her and Rich very busy with school, sports and other extra-curricular activities.