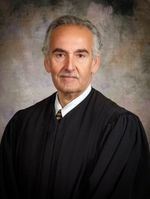 Judge Berger is the Presiding Judge of the Family Division of the Berrien County Trial Court.

Judge Berger is a native of Detroit and graduated from Michigan State University (James Madison College) in 1979 and the University of Detroit School of Law in 1982. He has resided in Berrien County since February, 1983, when he began his legal career as an Assistant Prosecuting Attorney in the Berrien County Prosecutor’s Office.

Upon leaving the Prosecutor’s Office in 1988, Judge Berger worked as an associate attorney for a St. Joseph law firm for several years before starting his own law practice, which focused primarily on family law and criminal defense cases. He also represented indigent clients in the Berrien County Drug Court for many years.

Judge Berger has extensive trial experience in many courts, and was also a trained mediator, serving as a court-appointed family law mediator in Berrien, Cass and Van Buren Counties.