The history of the Berrien County Sheriff’s Office is rich to say the least. In the last 189 years since the first Sheriff took office, the position has been graced by 37 leaders, representing more than just law and order in Berrien County. Some sheriffs were farmers, others were politicians and law men, one was a woman, and even a Canadian and Scotsman, some moved away after serving while others lived and died in Berrien County.

It has been written that the first Berrien County Jail was constructed in St. Joseph between 1832 and 1834 by Berrien County’s 2nd Sheriff, Fowler J. Preston. The was described as a wooden structure, 24x32 feet in dimension, 2 stories tall, containing the jailer’s dwelling and 2 cells on the lower floor with a number of cells on the upper floor. Prisoners were provided with blankets, bed, tin washbasin and a tin bucket for use as a toilet. The County Supervisors had to ban the use of liquor in the jail and prohibit women from spending the night with prisoners. 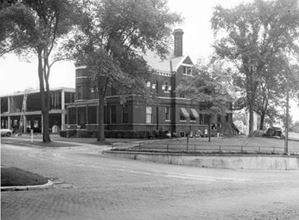 In December of 1894, the county seat was moved back to St. Joseph and a new Berrien County Courthouse and Jail were completed in 1896 at the corner of Church and Port Streets. The current Sheriff’s Office and Jail came about in 1958 and the previous structure was torn down and is now used as a parking lot.

In December 1929, the Berrien County Sheriff’s Office made national news with what deputies recovered in a Stevensville residence. Little did anyone know that the quaint, stylish bungalow along Red Arrow Highway south of Glenlord owned by Fred Dane was hiding many secrets, including an arsenal of ammunition, three bulletproof vests, two Thompson sub-machine guns, revolvers, sawed-off shotguns, hand grenades and tear gas bombs. The two Thompson sub-machine guns found included those used in the St. Valentine’s Day Massacre in Chicago and another murder in New York, as later proven by ballistics tests. Besides the enormous amount of weaponry, deputies also found trap doors, dozens of disguises and several well-thumbed detective novels. An upstairs closet revealed some $390,000 worth of bonds stolen from a November 1929 bank robbery in Jefferson, Wisconsin. Fingerprint checks linked a list of alias names to one; Fred "Killer" Burke. As one of the triggermen linked to the St. Valentine’s Day Massacre, Burke was later convicted of murdering St. Joseph City Police Officer Charles Skelly and the infamous "Tommy guns" are still housed at the Berrien County Sheriff’s Office. These priceless representations of an infamous era in history are logged as evidence which means they can never be sold. If they would ever be taken off the books as evidence, they would have to be destroyed. 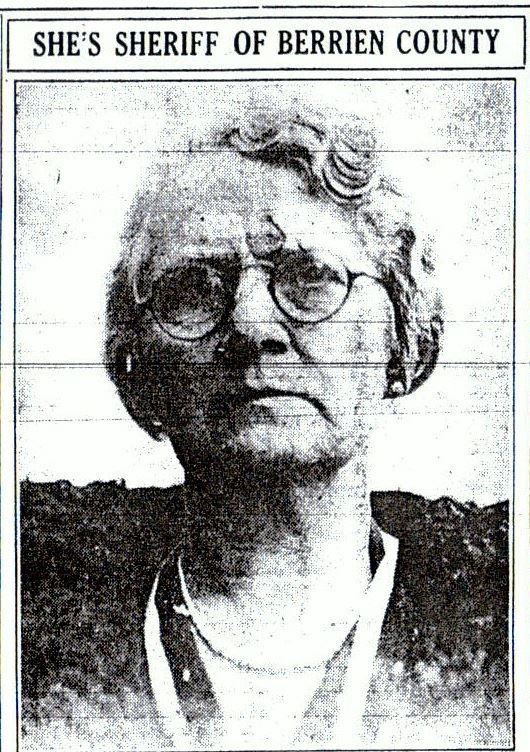 During the trial and limited incarceration of Fred "Killer" Burke at the Berrien County Jail in 1931-1932, Fred J. Cutler served as Sheriff. A little over a year into his term, Sheriff Cutler became ill and was transported to the hospital for emergency surgery. He died suddenly on February 5, 1932, the only Berrien County Sheriff to do so while still holding office. The following week, a special meeting was called by Probate Judge William Andrews, Prosecutor Wilbur Cunningham and County Clerk Ben Bittner and each one picked Sheriff Cutler’s wife to serve the remaining 11 months of his term. At the time, Undersheriff Bryan Wise had been indicted on bribery charges. Jane Irene Woodruff Cutler became the first and only female Sheriff of Berrien County to date. Although Sheriff Jane Cutler never carried a gun herself, she would ride along with her deputies and would even nurse the inmates back to health if they were ill. When asked why she didn’t carry a gun she smiled and stated, "I was scared to death of guns." She prepared baby food at home for female prisoners who had infants and would show compassion to the families of those housed in her jail. Although she was quite the nurturer, she also possessed a great skill for getting confessions that made many deputies envious of her. She served out the remainder of her husband’s term and never sought office again. She died in 1958 at the age of 83.

On another tragic note, one former Sheriff of Berrien County was a crew member of the legendary ship Chicora, which was lost on Lake Michigan on January 21, 1895. James R. Clarke, a native of Quebec, served as Sheriff from 1881 to 1884. The ship was never found and no bodies were ever recovered, however the wreck continues to be sought after by shipwreck hunters.

Another former Sheriff died of injuries sustained when he was run over by a train at the Pere Marquette Train Depot. In December of 1891, Joseph W Weimer attempted to board the rear platform of a coach when he swung around and got caught between two cars. He fell between them, severing one leg and badly injuring the other. He was attended to and was eventually taken back to his residence in Benton Harbor, but he succumbed to his injuries. He had served as Sheriff of Berrien County from 1872 to 1876 and is buried in Morton Hill Cemetery in Benton Harbor.

James Graham was the youngest Sheriff at 28 years of age serving from 1859 to 1862. In 1861, Sheriff Graham came face to face with a lynch mob. On two separate nights, an angry mob tried to storm the jail to hang a black male inmate who had been accused of poisoning a white family. Fortunately the mob did not gain access to the jail and no further action was taken.

Berrien County’s longest serving Sheriff was Forrest "Nick" Jewell who served 21 years from 1969 to 1990. Sheriff Jewell modernized the department and was also the last Sheriff to live in the building with his family.

From Augustus B. Newell to Leonard Paul Bailey, 189 years of law enforcement cannot be summed up with mere words but more from the history books and photos, old newspaper articles, the colorful memories of residents and all of the brave souls who have served within the walls of the Berrien County Sheriff’s Office over the years.