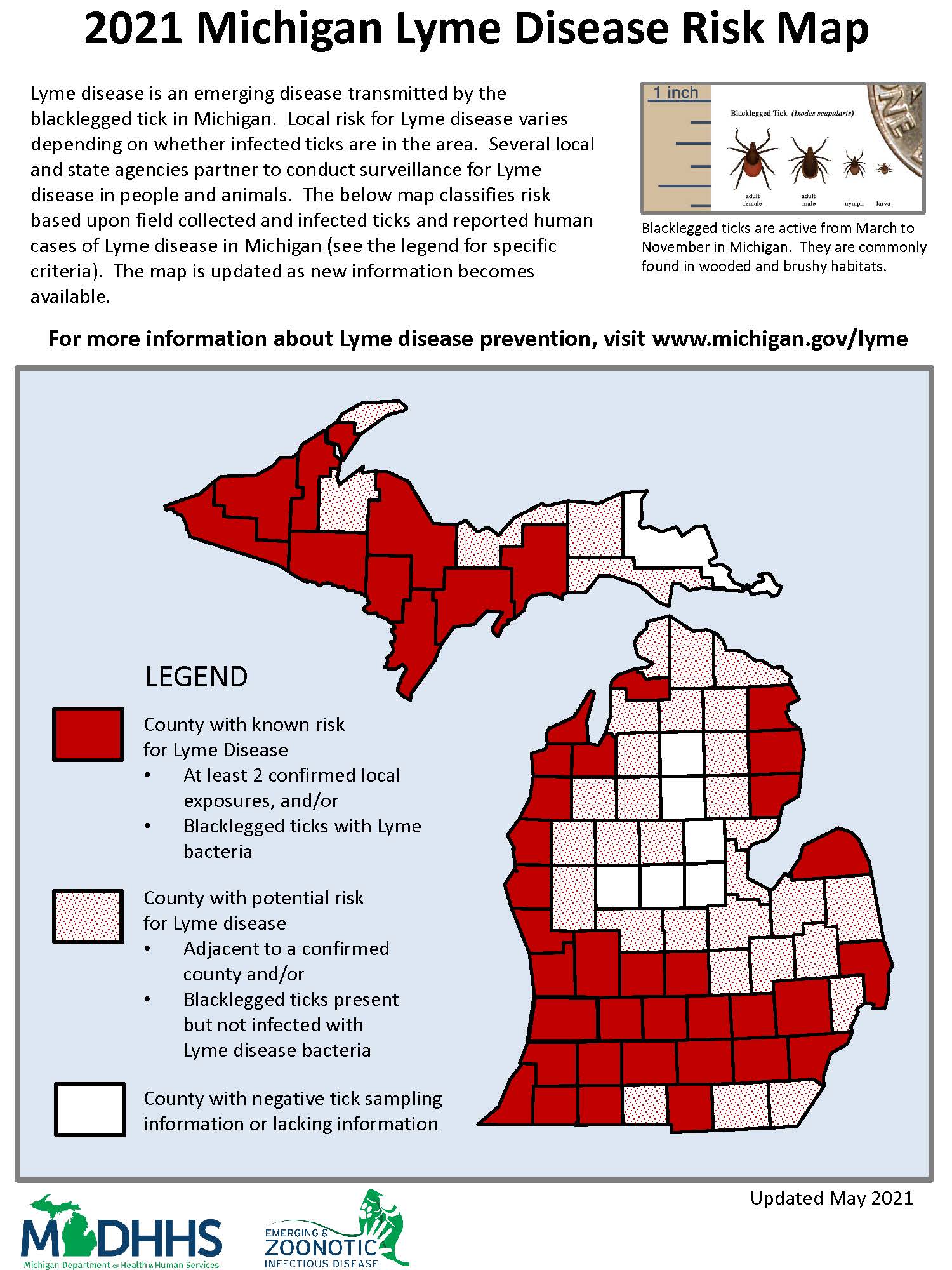 Lyme disease is caused by the bacterium Borrelia burgdorferi and is transmitted by the blacklegged tick.   It is the most commonly reported vector-borne disease in the United States and it is spreading across the state of Michigan, including in Berrien County.  Typical clinical signs include flu-like symptoms however, if left untreated may spread to joints, the heart, and/or the nervous system.  The majority of cases can be treated successfully with antibiotics.  Finding and removing ticks promptly can prevent Lyme disease.

You can submit a “’tick pic” through the Michigan Department of Health and Human Services for identification.

EEE is a rare disease that is caused by a virus spread by infected mosquitoes. EEE virus is one of a group of mosquito-transmitted viruses that can cause inflammation of the brain (encephalitis). In the United States, approximately 5-10 EEE cases are reported annually. Multiple human and animal cases were reported in in Michigan in 2019.

Prevent mosquito bites whenever possible. See more information from the Centers for Disease Control and Prevention and the Michigan Department of Health and Human Services' page.

West Nile virus (WNV) is carried by certain types of mosquitoes in Michigan, including those found in Berrien County. It is a potentially serious disease that can affect anyone, but people over age 60 are more likely to get the more severe form of WNV illness. The risk of bites from infected mosquitoes is highest for people who work or play outdoors. Wearing insect repellent when outdoors (especially at dawn and dusk) is important to prevent WNV.

Rabies is a preventable viral disease of mammals most commonly transmitted by a rabid animal bite.   The majority of reported cases occur in wild animals such as raccoons, skunks, bats, and foxes.  The virus infects the central nervous system resulting in disease within the brain and then death.  In people, the symptoms initially include fever, headache, and general weakness or discomfort.  As the disease progresses, the symptoms become more severe including insomnia, anxiety, confusion, slight or partial paralysis, excitation, hallucinations, agitation, increase in saliva, difficulty swallowing, and fear of water.  Typically death occurs within days after the onset of these symptoms.

All animal bites and exposures to bats should be reported to the Berrien County Health Department. Call us at 269-926-7121.