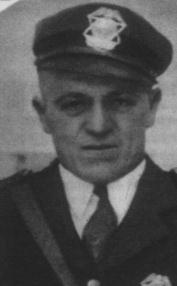 On December 14, 1929, 25-year old St. Joseph City Police Officer Charles Skelly was on foot patrol at the corner of Broad and State Streets. At around 7:30 p.m., Forrest Kool of Weesaw Township approached Skelly to let him know that a Hudson coupe had brushed fenders with his car. Skelly approached the driver and ordered both men to go to the police station, a couple blocks away at Main and Broad Streets. Skelly then jumped onto the running board of the Hudson when the driver pulled a Colt .45 caliber automatic gun from the door pocket and fired three bullets. One bullet entered his chest, one in his right side, and the third bullet was fired into his back as the wounded officer swayed and swung from the car. Skelly stumbled backwards but managed to get on his feet for a moment while he clasped his hands to his abdomen, crying out in pain. He fumbled for his gun but the driver fled south. Witnesses rushed the officer to the hospital but Skelly died at 11:10 p.m. His last words were, "Get that guy!"

The true identity of the driver began to emerge shortly after officers found the wrecked Hudson down the road. Papers inside the vehicle gave the owner's name as Fred Dane so the officers rushed to his residence. Little did anyone know that the quaint, stylish bungalow was hiding many secrets, including an arsenal of ammunition, bulletproof vests, and two Thompson sub-machine guns. The Thompson sub-machine guns found included those used in the St. Valentine's Day Massacre and another murder in New York, as later proven by ballistics tests. Besides the enormous amount of weaponry, officers also found various documents linking a list of alias names to one; gangster Fred "Killer" Burke.

After being captured in 1931 in Missouri, Fred "Killer" Burke pled guilty to 2nd Degree Murder of Skelly and was sentenced to life in prison. He served his sentence at Marquette State Penitentiary.

Officer Charles Skelly was born on May 3, 1904 in Bainbridge Township, Michigan, and his body was laid to rest in Crystal Springs Cemetery, Benton Harbor, Michigan.